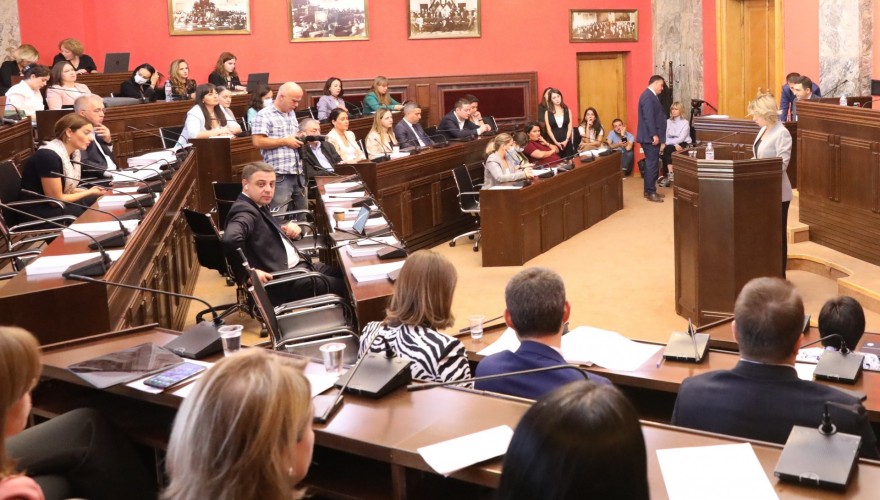 The Committee heard the PD Nino Lomjaria reporting on the human rights state for 2021.

She overviewed the respective challenges and the achieved progress and dwelt on the fulfillment of the issued recommendations.

The PD Office received 4666 information on violations of human rights in 2021 and 11126 calls to the call operator, the Office issued 67 recommendations to the state agencies. “The greatest part of the recommendations has been issued to the Justice Ministry, Prosecutor’s Office, Education Ministry and Interior Ministry. We have developed 20 special reports, 17 Constitutional appeals and 4 communications to the CoE Committee of Ministers. We have developed and issued 13 amicus curiae positions”, - she stated and dwelt on the challenges on the right of life, emphasized the situation in the mental hospitals and the state of the patients, violation of privacy, femicide on a gender basis, forms of the decision-making in the High Council of Justice and rapid and effective justice.

The Office has studied 52 criminal cases investigated by the State Inspector and revealed that the investigations met the efficiency standards. “Providing this fact, it is particularly appalling that based on the legal changes adopted in 2021, the Office of the State Inspector has been annulled as of March 1, 2022”.

According to her, the Office revealed 161 new facts of discrimination where 17% were committed on a political basis. As of the labor right, the Office has held 327 inspections in 249 facilities. “We issued 1766 directives the greatest part of which concerned the working time, labor agreement term and the essential violations”.

According to her, the pandemic management was problematic and posed a real threat to human life and health rights. The targeted social aid has registered 27,4% of the population – 532 242 persons are eligible for the living allowance. The PD dwelt on the rights of children, domestic violence against children, rights of persons with disabilities and the state of the residents of the occupied regions. As of the cultural heritage, the rehabilitation of the world cultural heritage monument Gelati was very relevant in 2021.

She touched upon the rights of the aged citizens noting that they are the most marginalized and vulnerable. According to her, the political integration of the national minorities is still problematic. After the report, the PD answered the questions.

According to the Chair of the Committee, Mikheil Sarjveladze, the report of the PD on human rights shall be impartial. “Naturally, it is the approach – the suspicion – but the assessment shall be extremely careful and in this regard, I approved the use of the words like “presumably” in the report”, - he stated.

The state agencies informed the Committee on the fulfillment of the PD recommendations.

According to M. Sarjveladze, the PD report, as special reports is an immense work, including for the Committee and a good instrument.

“We witnessed goodwill of the state agencies concerning the recommendations and it is a good precondition for the elimination of the challenges related to the poor performance. We shall not count the recommendations but see to their realization and tangible outcomes, which requires our cooperation with these agencies and organizations if we want to see the results”, - he added.