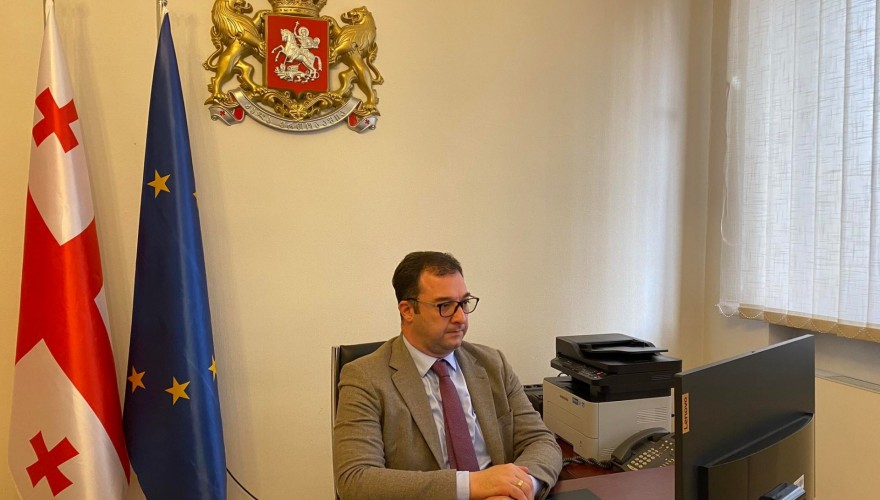 The Chair of the Sector Economy and Economic Policy Committee, David Songulashvili participated in the Parliamentary Plenum of the Energy Community with the agenda of energy security against the background of the Russian invasion to Ukraine. In his speech, MP stressed the importance of the energy independence of Georgia and overviewed the commitments assumed within the Energy Community membership.

“I am glad to enjoy the opportunity to participate in and speak about the vital issue – energy independence. However, first of all, I would like to express my support to the sovereignty and territorial integrity of Ukraine. Today, our agenda, directly and indirectly, is connected to the achievement of independence from Russia, which is a problem that we and Ukraine share. As you may know, Georgia accessed the Energy Community 5 years ago and during this period, the country strives to contribute to the development of the energy market. We have achieved significant progress in the fulfillment of the commitments assumed within the membership of the Energy Community”, - he stated and added that in 2019, Georgia adopted the Laws on Encouragement of Production and Utilization of Energy from the Renewable Sources, and on Energy Labelling, and approved two other Laws on Energy Efficiency, and Energy Efficiency of Premises.

“Simultaneously with the ratification of the hereof Laws, we keep the development of the respective secondary legislation. As of present, we have already approved 9 secondary legal acts mostly on encouragement of renewable energy. The adoption of the updated Energy Policy is pending and a Concept of a New Model of Electricity Market has already been approved”.

In his speech, he underlined the importance of the Black Sea submarine cable project and the special role of the country in this project.

“Our efforts in the Black Sea submarine cabling are immense in the direction of conversion of Caucasus into the electric power hub, the construction of which is a vital and perspective project for the energy system of Georgia. By realizing this project, the Georgian economy and energy sector will enjoy brand new opportunities in the angle of the enhancement of the global energy security, which means that Georgia will become capable to connect the power lines of the region with Europe and vice versa. As a result, Georgia will celebrate the breakthrough in terms of energy independence and security and its economic profitability is clearly evident in the report developed in cooperation with the World Bank on the preliminary economic analysis. Besides, we shall take into account the energy potential of the Caucasus and the capacity of Georgia to serve as a bridge between the energy systems/markets of Europe and Central Asia. Simultaneously, the construction of the renewable energy facilities shall remain uninterrupted, which will allow us to utilize the resources to a maximal extent and minimize the import obligation. I believe, that by implementing the Black Sea submarine cabling project, the Association Agreement, and the commitments of the Energy Community, Georgia will acquire the status of the power energy hub of the Caucasus implying the competitiveness of the country, its capacity to valuably master the potential of the renewable energy and the export of the excessive energy abroad. At that, it will ensure a stable regulatory and market frameworks facilitating us to attract the investments to the production of power energy, and stable and uninterrupted power supply so essential for the economic development”, - he added.

Energy Union was established in 2005 in Athens, Greece by the Constituent Agreement. Georgia accessed the Community in 2017.

The mission of the organization envisages the formation of stable regulatory and market frameworks to attract investments, and the establishment of an integrated energy market to facilitate the integration into the EU market.