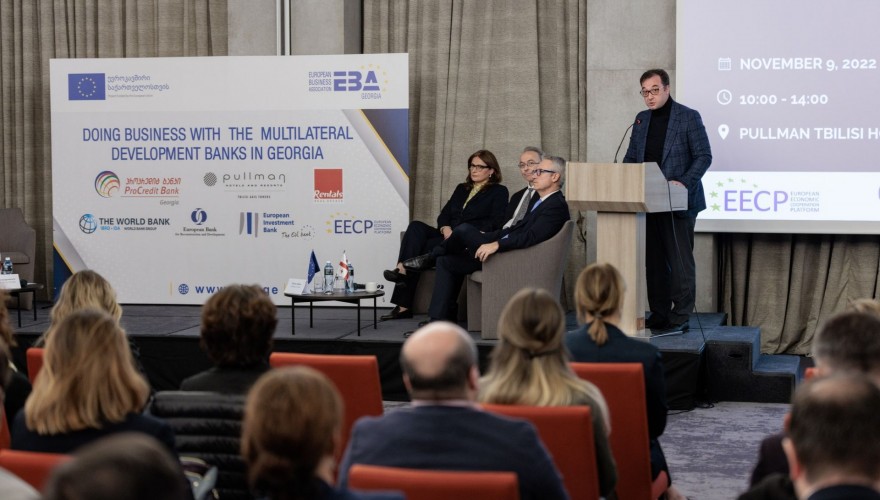 The Chair of the Sector Economy and Economic Policy Committee, David Songhulashvili, participated in the EBA conference on business financing and access to finances.

Davit Songhulashvili's speech covered the country's economic policy, the ease of starting a business, and the challenges that are being actively worked on both in the parliament and in the government.

"I would like to emphasize that Georgia has become one of the world leaders in terms of the ease of starting a business, which is supported by international studies and ratings, as a result of the active reforms implemented in the nation and the economic policy that we implement in close collaboration with the executive authorities and the private sector. To have the greatest impact on building the economic might of our nation, the favorable trends we currently have in foreign commerce, tourism, investment, transportation, and the labor market must be maintained. The active participation of all parties is crucial to this process since it will help us find appropriate and consistent answers to problems. The majority of the key elements of changes for economic growth are covered within the committee's mission. As a result, the primary goal of our work is to continuously support the legislative-level improvement of the business environment. As a result, the legislative modifications intended to align and put into practice the commitments made within the framework of the Association Agreement and the procedures outlined by the DCFTA are currently in an active phase”, - David Songhulashvili stated.

In his speech, the MP noted that the market for goods purchases by the central authorities of the European Union has already been opened for companies registered in the country.

"The fact that the central EU authorities have opened the market for goods purchases for businesses registered in our country, successfully completing the first stage of the commitments our nation made in the area of public procurement under the EUAA, is significant news. As a result, the company registered in Georgia has the chance to compete with other suppliers from across the globe in the tenders for the acquisition of goods that are announced by the central authorities of the 27 member states of the European Union. In addition, a new draft law has been presented for discussion in the Georgian Parliament as part of the public procurement reform. The normative and technical parts of procurement are altered as a result of this reform, which will make the procedure as wholesome as possible, bring it into compliance with contemporary world norms, and provide a more effective public procurement ecosystem. I'm pleased that a meeting venue like this offers a chance to foster communication between business sector representatives, foreign financial institutions, and partners, as this is a crucial step in luring investments and hastening the integration of our nation into the global economy”, - the speaker added.

The conference, which was held with the support of the EU, was opened by the Chairman of the European Business Association, John Braeckeveldt.

Conference participants had a unique opportunity to get information about EU investment opportunities and establish business contacts for future projects.