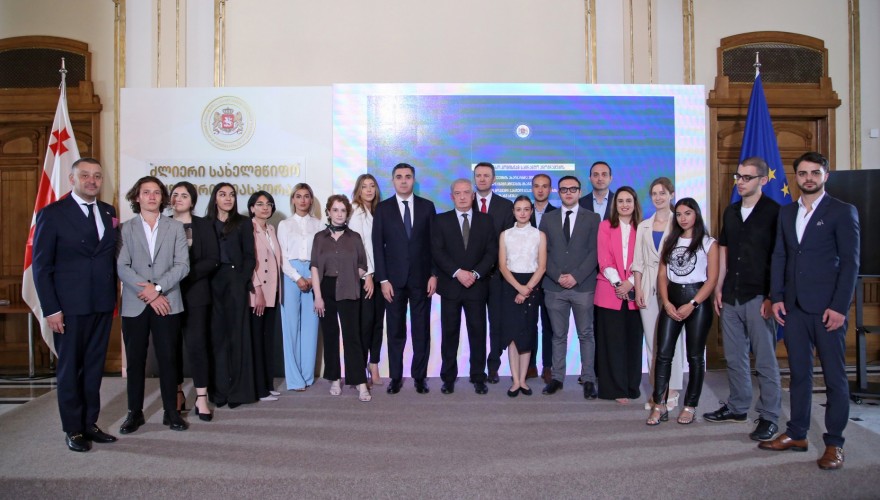 The First Vice-Speaker, Giorgi Volski, Chair of the Diaspora and Caucasus Issues Committee, Beka Odisharia and the Committee members participated in the awarding ceremony of the Diaspora Grant Competition organized by the Foreign Affairs Ministry.

G. Volski welcomed the youth and delivered the certificates. “I hail the enthusiastic aspiration of these youth striving to exercise the mission of a young ambassador. I would like to wish each ambassador to be capable to see deeper through the situation, observe the reality in the world and in the region, identify the problems of our country and be driven with the desire to unify the youth countrywide”, - he stated.

B. Odisharia also congratulated the youth and delivered the certificates. “Diaspora is the opportunity and a challenge at the same time since these people have left the country due to their poor social state and poverty, they have to work abroad and thus, they are modern heroes for us; however, these people managed to give birth to the new generations in their families, the youth that is purposed to use their accumulated knowledge and experience and build a strong country, strong Georgia. They are expected in their homeland and by their compatriots”, - he stated.

According to him, the competition will be further extended.

“I would like to congratulate the participants and the winners of this competition on the victory in the Didgori Battle. As the Prime Minister has re-cited the words by our Patriarch, we still have to win Didgori. Yes, we have to win Didgori together with our diasporas”, - he added.

The Foreign Minister has organized three grant programs: “Be a Young Ambassador of Your Country”, “Supporting the Diaspora Initiatives”, and “Supporting the Georgian Folk Dance and Song Ensembles Abroad”; 154 applicants have been participating.

The special jury, composed of MPs, members of the Presidential Administration and the representatives of the state and international agencies revealed 43 winners.