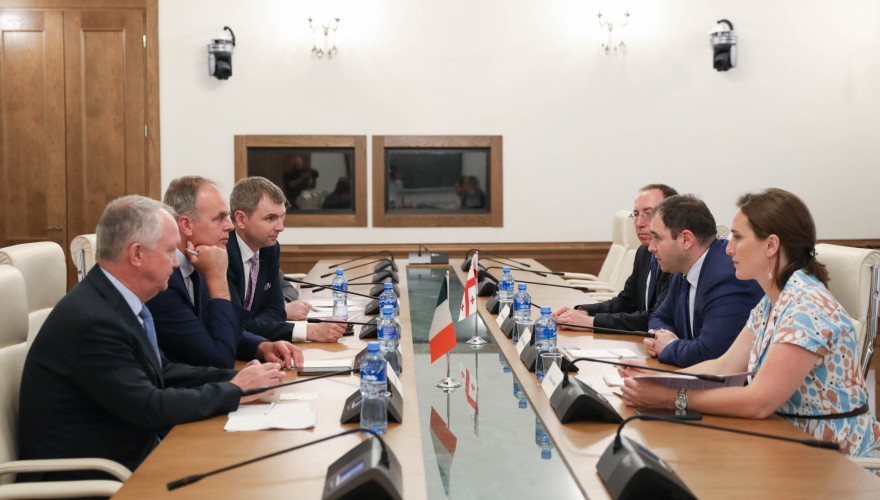 The Chair of the Foreign Relations Committee, Nikoloz Samkharadze held a meeting with the Delegation of the EU Affairs Committee of the Parliament of Ireland headed by the Chair of the Committee, Joe McHugh and discussed the cooperation between the countries and further steps of Georgia to the EU integration.

“At the meeting, we dwelt on the EU integration of Georgia and granting the status of a candidate. We went through the details of the issued recommendations. We unveiled our disappointment about the decision made as we were expecting the status, though we are committed to fulfilling the conditions outlined in the document. We also underlined that some recommendations are vague and require specification”, - N. Samkhradze stated.

The parties touched upon the threats from Russia and overviewed the situation at the occupation line. N. Samkharadze introduced the details of Russian creeping annexation. The Irish politicians informed MPs about the developments in Northern Ireland and the problems stemming from this situation in the relations between Ireland and Northern Ireland against the background of Brexit. As noted, Ireland keeps supporting the European future of Georgia.

“It was a friendly meeting, where they clearly declared that they are always supporting Georgia and hence, we will have yet another strong supporter on our EU integration path”, - N. Samkharadze noted.

The meeting was attended by the Deputy Chair of the Committee, Mariam Lashkhi.