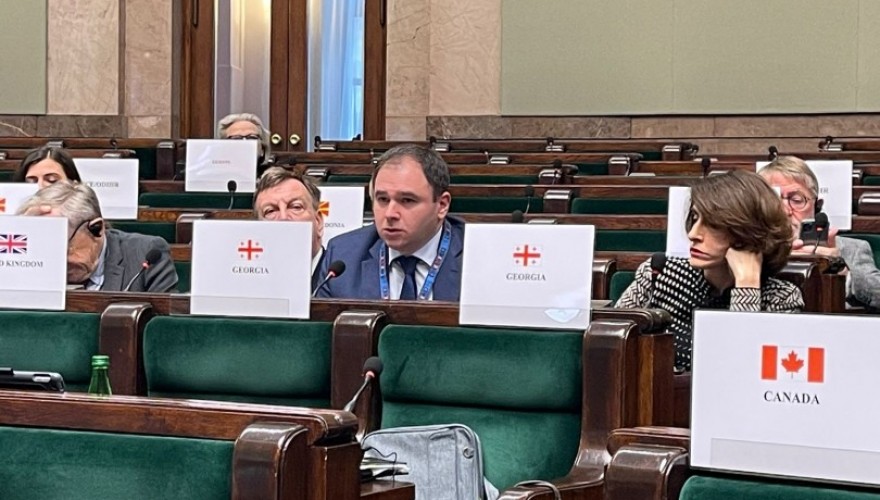 The Chair of the Foreign Relations Committee, Head of the Georgian Parliamentary Delegation to the OSCE PA, and the Chairman of the OSCE PA Committee on Democracy, Human Rights, and Humanitarian Questions, Nikoloz Samkharadze took part in the OSCE PA Autumn Session as well as the committee sessions and bureau meeting in the Parliament of Poland.

Speaking at the OSCE Parliamentary Assembly, Nikoloz Samkharadze condemned the bombing of civilian infrastructure in Ukraine, including energy facilities, by Russia.

"To bring about a humanitarian catastrophe in Ukraine, energy and civilian infrastructure are being bombed. This Russian attempt is strikingly similar to the scenario it implemented in Georgia's occupied territories, where it caused a humanitarian catastrophe by preventing up to 250,000 ethnic Georgians from returning to their homes, prohibiting Georgian children from receiving an education in the Georgian language, and erasing Georgian traces in those areas. In the currently occupied territories, where Georgians are still subjected to discrimination based on their ethnicity, the Russian Federation has established an Apartheid system. The European Court of Human Rights, where Georgia prevailed in its case against the Russian Federation, has confirmed this reality. Georgia also prevailed in the case before the International Criminal Court of Georgia, wherein Russian nationals were judged accountable for war crimes”, - Nikoloz Samkharadze stated during his speech.

The Chairman of the Foreign Relations Committee spoke about the assistance provided by Georgia to Ukraine, including the sharing of experience so that Ukraine could win disputes against the Russian Federation in international criminal courts.

According to him, Georgia was the country through which Ukraine filed a lawsuit against Russia in The Hague.

"Georgia assisted Ukraine, which is not a member of the International Criminal Court, file a lawsuit against Russia, and Georgia will provide similar assistance to our friend Ukraine in the future”, - Nikoloz Samkharadze noted.