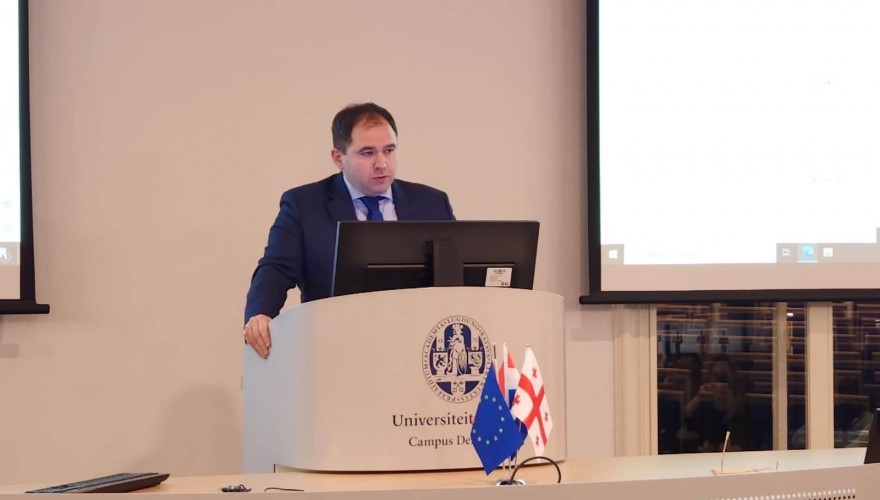 Nikoloz Samkharadze, the Chairman of the Foreign Relations Committee and head of the Georgian Delegation, gave a public lecture at Leiden University as part of the Committee's official visit to the Kingdom of the Netherlands, with the main topics of the new global order and Georgia's integration into Europe and the Euro-Atlantic structures.

The challenging situation in the Russian-occupied territories, Georgia's peace policy, the country's aspirations for European and Euro-Atlantic integration, Georgia's contribution to EU energy security, and Georgia's role in policing Armenia-Azerbaijan relations were all given special consideration.

During the visit, Nikoloz Samkharadze met with the representatives of the Ministry of Foreign Affairs. The parties talked about the importance of the Netherlands' support for Georgia, the process of implementing the EU's 12 recommendations by Georgia, and the issue of granting Georgia a candidate status.

"We had engaging discussions at the Dutch Ministry of Foreign Affairs about the significance of giving Georgia candidate status for the European Union and the initiatives taken by the Georgian Parliament to implement the European Union's 12 recommendations. The Dutch side reaffirmed its backing for the implementation of the EU’s recommendations and expressed optimism that Georgia would be granted status the following year. Since Georgia's position is expanding in a number of areas, there is a specific interest in Georgia among EU capitals against the backdrop of the ongoing conflict in Ukraine”, - Nikoloz Samkharadze stated.

The Delegation of the Foreign Relations Committee, led by Nikoloz Samkharadze, is on an official visit to the Kingdom of the Netherlands.