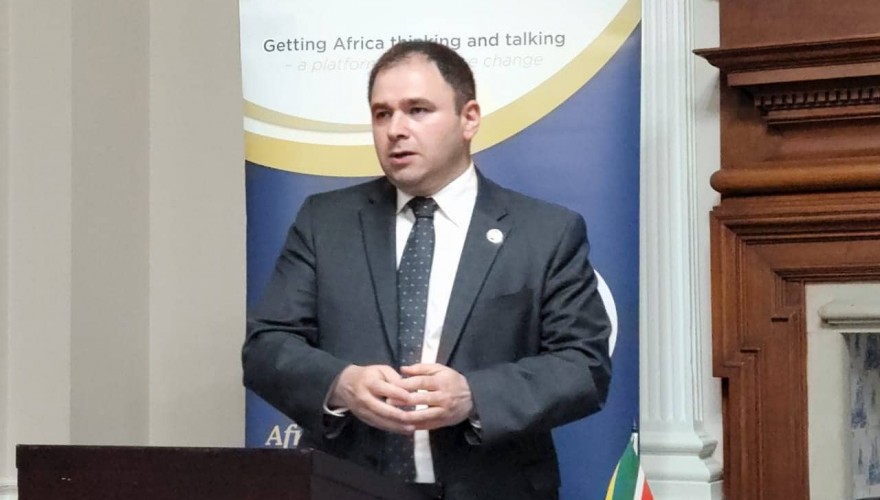 As part of the visit of the delegation of the Parliament of Georgia to the Republic of South Africa, the Chairman of the Foreign Relations Committee, Nikoloz Samkharadze, gave a public lecture at one of the leading analytical centers on the African continent - the South African Institute of International Affairs (SAIIA).

The speech's primary focus was on the security of the Black Sea in light of the shifting geopolitical landscape.

The continuous Russian aggression in Ukraine, the security difficulties in the Black Sea region, and the significance of Georgia in fostering stability and security in the area were all topics covered in depth by Nikoloz Samkharadze. He highlighted Georgia's occupied territories as one of the key issues in the region.

"Although we are late, everyone has already realized that the Black Sea region is crucial to the future security of Europe. Russia employs all available measures to further its imperialist objectives. What is happening in Ukraine right now has already been witnessed in Georgia. This is due to the fact that the international community did not adequately condemn Russia for its 2008 aggression against Georgia and its 2014 annexation of Crimea. Currently, as a new international order is taking shape, it is crucial to protect the West's stability and build new security mechanisms, one of which will be increased security in the Black Sea region, as there is currently no Black Sea security system. We believe Georgia’s accession to NATO will contribute to enhancing the security of the Black Sea”, - Nikoloz Samkharadze stated.

Nikoloz Samkharadze paid special attention to Georgia as a stable transit route for Europe, where cargo and energy resources can be transported from China and Central Asia.

"Eventually, Europe came to the conclusion that its dependence on Russian energy supplies poses the greatest threat to its security. Because of this, reducing reliance on Russia and finding new sources of energy supply have become top priorities for the European Union. Georgia, as a stable and democratic country, has the potential to transit energy resources from the Caspian Sea and Asia to Europe, which will significantly contribute to Europe's energy security. The transit of numerous goods through Georgia from Asia to Europe has greatly expanded recently, which is remarkable and highlights the significance of Georgia's transit potential”, - Nikoloz Samkharadze.

The event was attended by members of the Parliament of the Republic of South Africa, representatives of analytical centers and the academic field, researchers, and various officials.

The meeting was accomplished with a question-and-answer discussion.