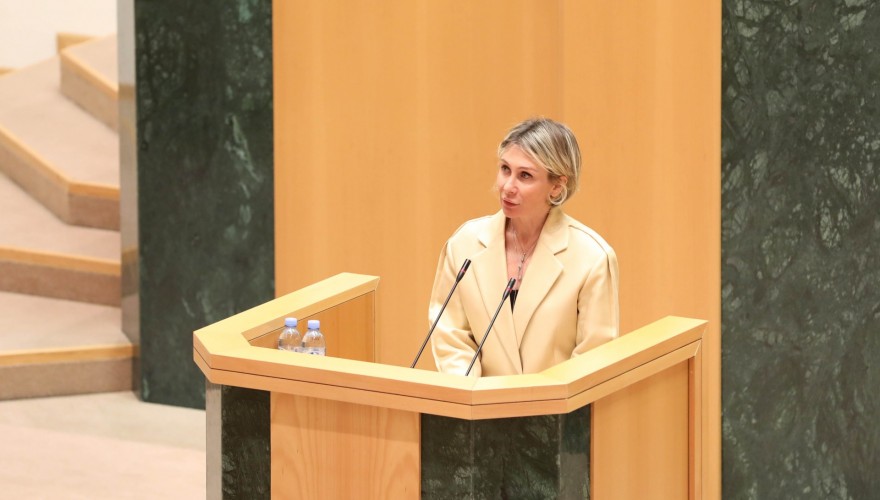 The Parliament heard the Activity Report for 2021 of the Gender Equality Council introduced by the Chair, Nino Tsilosani. The Report provides the period of January 1,-December 31 and reflects the gender equality situation in the country and the activities implemented in this direction.

The reporter overviewed the activities of all three institutions operating in the gender equality sphere – the Inter-agency Commission on Gender Equality, Violence against Women and Domestic Violence; the Public Defender Office, and the Gender Equality Councils in municipalities. Speaking about the efforts for the enhancement of gender equality, she introduced the main macroeconomic parameters and stressed the fulfillment of the international commitments and supporting the political participation of women; as well as the legal changes eliminating the violence against women and domestic violence and necessity of other mechanisms.

According to her, in 2021, the Council was active in developing the state concept commenced in 2019 backed by the UN Women.

“Within the development process, we have held 6 working meetings. The document is a uniform state approach on the elimination of all forms of discrimination on a gender basis and provision of gender equality through the public and private relations in the civil, political, economic, social and cultural spheres. The starting point of the document is the elimination of the basic and system grounds and consequences of gender inequality”.

She dwelt on the state concept on economic empowerment of women highlighting the measures aiming at the establishment of equality policy, countering discrimination and public awareness on gender equality.

“All the actions evidence that 2021 was particularly busy with gender equality issues. The changes introduced to the legislation and the policy, as well as the fulfillment of the international commitments, constitute the significant steps taken for facilitation of gender equality and elimination of violence against women”.

“In 2022, we have already estimated the balance by applying the hereof method and we are glad that similar to many European countries, the Georgian Parliament is quite balanced deriving from the gender equality principles”.

The Chair of the Human Rights and Civil Integration Committee, Mikheil Sarjveladze gave a positive assessment of the report: “We had the honor to cooperate on one of the EU recommendations related to gender equality, which proved to be truly productive and I believe, it is particularly valuable. The Gender Equality Council has long ago become the real platform allowing the consolidation of all efforts directed to gender equality in Georgia and it’s really prospective”, - he stated