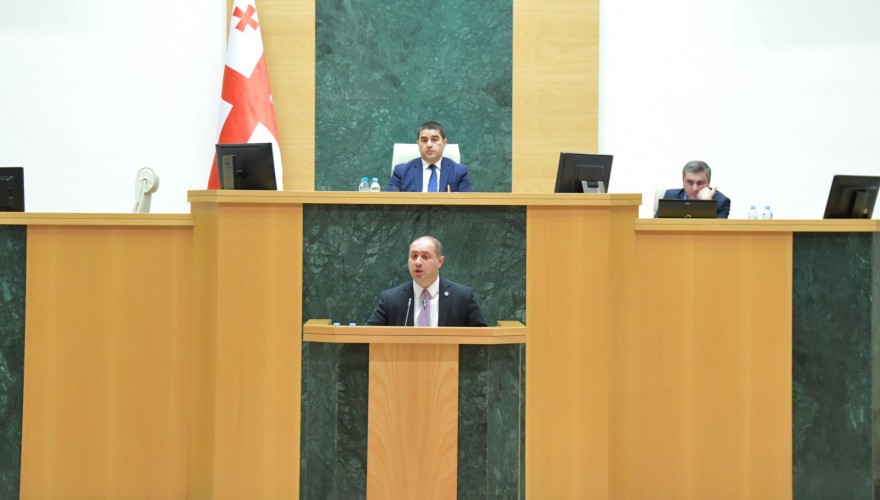 The Parliament discussed with the I reading the Draft Election Code and the Draft Law on Political Unions of Citizens and adopted with 83 votes as one of the recommendations of the EU. The Drafts initiated by the Legal Committee were introduced by the Head of the Working Group, Givi Mikanadze.

The changes concern the revision of the Election Code in line with the OSCE/ODIHR and Venice Commission recommendations; the Working Group also shared the recommendations of GRECO.

“The legal package has been developed on the basis of the Rules of Procedure within the Working Group of the Legal Committee with the engagement of the part of the opposition and the respective agencies. The Group, for the last 2 months, has developed the package of the changes based on the studies, putting the national legislation in a fundamentally new format – it is the highest standard already applied in the leading countries, which we intend to establish in 2024, however, some issues become effective earlier. The Draft has been initiated earlier than the term established by the ruling party”, - the reporter noted.

The Drafts envisage the establishment of the electronic electoral system in 2024 for the registration and identification of electors, voting, vote count and development of the final protocol. The changes to the Election Code double the sanction for the illegal use of administrative resources and increase the responsibility term for the offender. It establishes a database of certified members of the PEC; if the counting in the PEC reveals 5 or more or 10 or fewer bulletins compared to the appeared electors, the PEC shall be subject to recount; the Draft envisages marking of the electors eligible for the movable boxes.

“The Draft increases the term of the appeal of the action of the PEC Chair to the District Commission and extends the mandate of the local observers. The Parliamentary Elections of 2024 are to be held by means of e-devices covering at least 70% of the electors, though the number may appear higher. The Drafts reflect the needs and reality important for the higher standards on human rights and electoral processes”, - G. Mikanadze stated