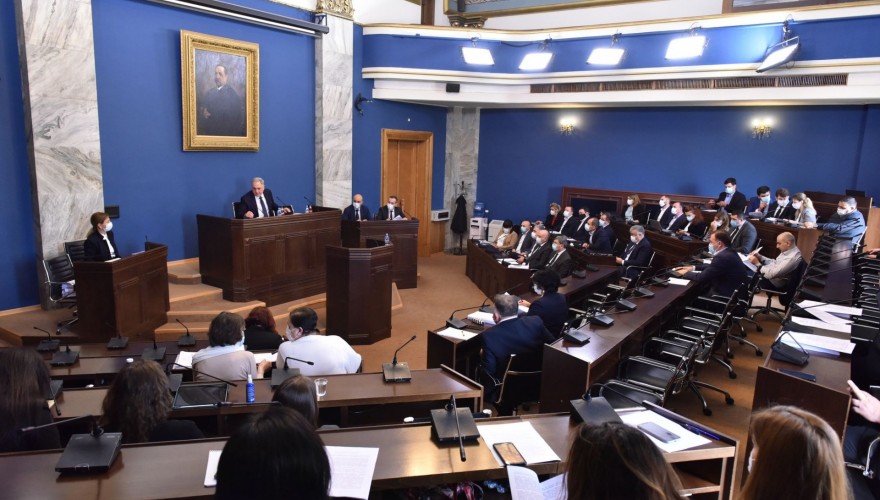 The Secretary-General, Ketevan Kvinikadze introduced the draft Parliament Budget for 2023 to the Budget and Finance Committee.

The total budget of the Parliament of Georgia for 2023, according to the document, is 60 million 906 thousand GEL.

"The projected budget of the Parliament for 2023 was set at 65 million GEL, according to the document of the country's main data and directions for 2022-2025, but taking into account that, as in previous years, it is not planned to bring the salaries of members of parliament in line with the salary coefficients provided for in the third appendix of the Law of Georgia on Remuneration in Public Institutions, the provided document allocates cash resources to the implementation of capital projects, and taking this into consideration, the Parliament of Georgia's overall budget for 2023 is 60 million 906 thousand GEL”, - Ketevan Kvinikadze clarified.

According to the rapporteur, no increase has been observed and will not occur in the article on remuneration. Part of the grants remains unchanged, neither the social security component provides for the increase. For the large capital infrastructure projects, an increase of up to 4 mln GEL is provided for in the non-financial asset growth clause.

According to the Secretary-General, the draft budget covers the rehabilitation works of the Parliament Palace and the re-equipment of the technical equipment.

"We are concentrating our efforts on infrastructure projects; we have already purchased a project through a tender for the implementation of strengthening and rehabilitation works, and we intend to complete a portion of the infrastructure project this year. Next year, we'll continue to put in a lot of effort in this direction”, - Ketevan Kvinikadze remarked.