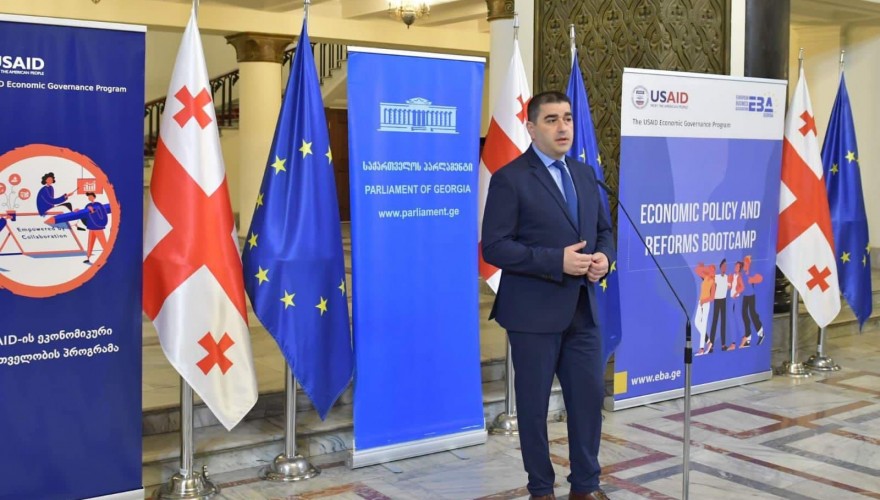 "The Economic Policy and Reforms Bootcamp covers important issues that young people should be interested in. The Georgian Parliament is a policymaker in a variety of areas, and I am delighted to be a part of this effort”, - the Speaker stated at the presentation of the Bootcamp.

The Parliament of Georgia hosted the event, which was backed by the European Business Association (EBA), the USAID Economic Governance Program, and the Sector Economy and Economic Policy Committee.

Shalva Papuashvili addressed the guests and spoke about the importance of the project.

"The Economic Policy and Reforms Bootcamp covers important issues that young people should be interested in. Because the Georgian Parliament sets policy in a variety of areas, including the economy, I'd like to express my gratitude to the Sector Economy and Economic Policy Committee and its Chairman, David Songhulashvili, for the Parliament's active engagement in this project”, - Shalva Papuashvili stated.

According to him, within the framework of the project, along with theoretical and practical knowledge, young people will be provided with information about the emerging professions amid the dynamics of the content of the global economy, including in Georgia.

"An Insolvency Practitioner (IP) was established as a separate profession after the Parliament passed a new law on insolvency. You may also be aware that the Parliament has passed a new Entrepreneurial Law and is currently working on a Code of Enforcement. These three laws are significant on the one hand because they reflect a new philosophy in terms of both insolvency and entrepreneurial law, and on the other side because they are one of the major milestones toward Georgia's accession with the European Union”, - Shalva Papuashvili said.

The Speaker thanked the USAID and EBA for their fruitful cooperation and wished the project success.

David Songhulashvili, Chairman of the Sector Economy and Economic Policy Committee, welcomed the start of the project and the students.

"I'm delighted the project began here, and I'm encouraged by the number of young people who are participating. Rapid economic growth is one of our country's most pressing concerns today, and we can only achieve it if we take a fresh, creative, and unconventional approach to the economy. It is critical that each of you participate in this process. Young people's free and non-standard perspective, I believe, will allow us to catch new ideas that we will put into effect. Following the problems that our country has encountered, this will enable us to go forward and quickly rebuild the economy. We shall be able to provide you with as much opportunity to actualize ourselves as feasible”, - David Songhulashvili remarked.

The Economic Policy and Reforms Bootcamp aims to raise students' awareness of the ongoing economic reforms in Georgia and to introduce them to the modern professions that emerge as a result of the reforms, thus creating ample employment opportunities.

Students will obtain practical information from the executives of the largest European companies operating in the country as part of the initiative, as well as build business skills that will help them succeed in their careers.