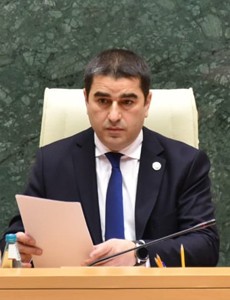 Shalva Papuashvili was born on 26 January 1976.

He has received his higher education in Georgia and Germany.

From 1998 to 2002, he studied at Saarland University (Germany) on a scholarship from the German Academic Exchange Service (DAAD), where he was awarded the Master of Laws degree in 1999 and the Doctor of Law degree in 2002.

On December 29, 2021, he was elected as a Speaker of the Parliament of Georgia.

On 31 October 2020, Shalva Papuashvili was elected a member of the tenth convocation of the Parliament of Georgia by the party list of the „Georgian Dream – Democratic Georgia“ party.

On 15 December 2020, he was elected the first deputy chairman of the Education, Science, and Culture Committee;

on 31 March 2021, he was elected chairman of the Education and Science Committee.

He is a member of the „Georgian Dream – Democratic Georgia“ faction.

He has served as a member of the Political Council of the „Georgian Dream – Democratic Georgia“ party since 16 January 2021, and as the party’s secretary of public relations since 27 March 2021.

In 2003-2007, Shalva Papuashvili was a law expert at German Technical Cooperation (GTZ).

In 2007-2017, he headed various areas of the Law Program of the German International Cooperation (GIZ) in the South Caucasus.

Since 2012, he has given lectures at various universities. He is an associate professor at Ilia State University.

Shalva Papuashvili has authored various works in the field of law, including the following:

He speaks English, German, and Russian.

Shalva Papuashvili: the awareness of Holocaust shall be maintained in all the generations to forever prevent this gravest fact of history 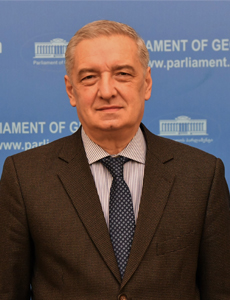 Giorgi Volski
The First Deputy Chairman of the Parliament

Giorgi Volski was born on January 18, 1957 in the city of Tbilisi. In 1978, he graduated from Tbilisi State University, Economic Faculty.