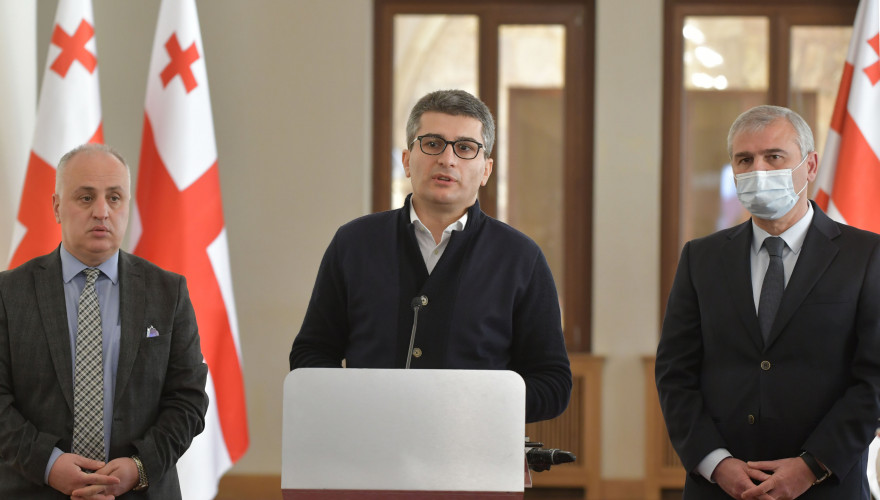 The Chair of the Faction “Georgian Dream”, Mamuka Mdinaradze, at the briefing overviewed the agenda of the extraordinary plenary session convened next week.

The agenda includes three main issues concerning the bill on Public Healthcare; the change to the Rules of Procedure, and the termination of the credentials of certain MPs ahead of time.

“The Parliament strongly supports the national vaccination plan undertaken by the Government and the Healthcare Ministry. Correspondingly, the bill on Public Healthcare has been initiated to the Parliament for the accelerated consideration, envisaging the possibility of the import of the WHO-approved vaccine for the COVID prevention and treatment. At that, in the event of detection of the side effects or aggravations, the state shall ensure the medical treatment and rehabilitation of the population free of charge.

The second issue of the agenda is the change to the Rules of Procedure. The team of “Georgian Dream” is oriented to allow the opposition parties to completely be engaged in the Parliamentary activity. Hence, the changes are to be introduced to the Rules of Procedure next week, envisaging the opportunity of the opposition MPs to be grouped and nominate the candidacies for the Vice-Speaker and the Deputy Chair of the Committee. At that, the opposition parties, unable to group in the Factions, will also be allowed to be actively engaged in the Parliamentary considerations and will enjoy the floor – 15 minutes – in the Parliamentary debates. The “European Socialists” introduced their proposal and Aleko Elisashvili also expressed his concern at the meeting with me and the Speaker and thus, we made the decision to determine these 15 minutes for the parties”.

He dwelt on the termination of the credentials ahead of time and noted that the “Georgian Dream” strives to give the opposition MPs a certain time to make a reasonable decision.

“In regards to the credentials, we try to give maximal time to the opposition parties. The Procedural Issues Committee is to consider their applications on January 27 and 28 to be further submitted to the Bureau and to be voted on February 2. We try to give them maximal time to make the reasonable and rational decisions prior to the consideration of their credentials by the Parliament”.