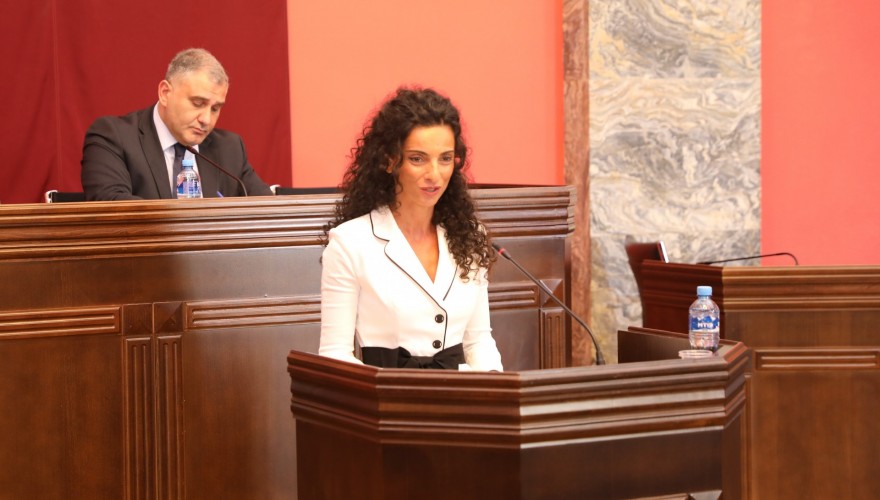 Five Committees discussed the Draft 3rd Periodic Report on the Fulfillment of the International Covenant on Economic, Social and Cultural Rights.

The Report aims at the provision of the Committee on the Economic, Social and Cultural Rights with information about the human rights state and progress in Georgia.

According to the Deputy Foreign Minister, Khatuna Totladze, the Report has been developed with the engagement of all competent agencies of the executive authority, as well as the judicial and legislative authorities, international organizations and NGOs. The Document reflects all main remedies undertaken by the state in view of human rights protection. As the reporter noted, the Document provides the implemented Constitutional reform, National Human Rights Strategy and Action Plan, as well as the Inter-Agency Council set up for the effective implementation thereof.

The Report also stresses the increased Parliamentary oversight function, including on the fulfillment of the recommendations by the UN Human Rights contractual bodies. A standalone Chapter is dedicated to the grave and further aggravating human rights situation on the territories occupied by Russia. “The grave human rights situation on the occupied territories is particularly appalling against the background when the Russian Federation impedes the international human rights mechanisms from accessing the occupied territories. Hence, the responsibility for the violation of the human rights is fully imposed on the Russian Federation as an effective controller state”, - she stated.

According to her, the Georgian Government keeps a non-deviation peaceful-resolution policy of conflicts and applies all diplomatic, political, legal and other leverage to ensure the human rights protection on the occupied territories. The Report describes the countering the corruption and reflects the steps taken to guarantee the economic, social and health rights of IDPs. The Report also provides the legal institutional reforms undertaken in view of realization of the labor rights, and overviews social protection system. Due attention is attached to the rights of women, prevention of domestic violence etc. with consideration of the reforms against human trafficking and in view of protection of rights of the children.

The reporter stressed the healthcare, educational and cultural reforms provided in the Report along with the eradication of poverty, due nutrition and accommodation issues. After the Parliamentary considerations, the Draft will be finalized, translated into English and submitted to the Committee on the Economic, Social and Cultural Rights.

“It is a fundamental legal document serving the basis for the human rights protection system and the modern democratic values. The Report underlines the progress of Georgia and describes the further development stages necessary for our uninterrupted progress in economic, social and cultural directions”, - the Chair of the Human Rights and Civil Integration Committee, Mikheil Sarjveladze stated.

The Human Rights and Civil Integration, the Sector Economy and Economic Policy, the Culture, the Foreign Relations, and the Health Care and Social Issues Committees approved the document.