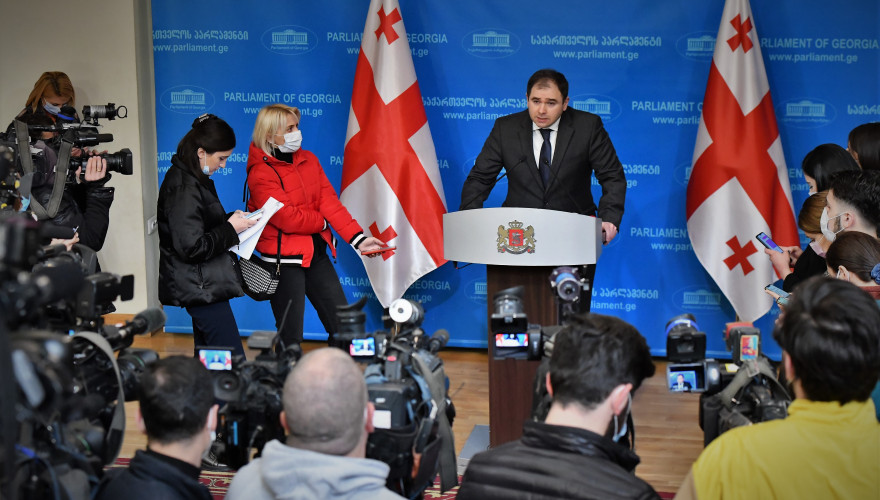 "As per the decision of the majority, the first initiative of the X Term Parliament will be a Draft Resolution on Foreign Policy", - the Chairman of the Foreign Relations Committee, Nikoloz Samkharadze stated and underlined the main task of the Government - de-occupation of the Russian-occupied regions of Abkhazia and Tskhinvali.

"To this end, the legislature will be vigorously involved in mobilizing international support and will use all international parliamentary platforms in strengthening the policy of non-recognition of independence and de-occupation of the occupied territories of Georgia”, - N. Samkharadze elucidated.

Pursuant to him, the Parliament will spare no effort to achieve tangible results in the peaceful resolution of conflicts with the involvement of the international community.

The Chairman of the Foreign Relations Committee outlined the priority areas on which the Parliament will actively work. Over the next four years, he added, the government will work with renewed momentum to implement the EUAA agenda and ensure institutional accession.

"The country continues to move towards full integration into the European Union, which directly responds to the Constitution of Georgia and the program aspirations of the Georgian Dream, which implies a strategic readiness to apply for EU membership in 2024. We expect that from next year, strategic cooperation between the United States and European countries will move to a new level and transatlantic unity will give a new motivation to Georgia's membership in NATO. For this, we will employ all the pre-accession tools that already exist between Georgia and NATO.

The strategic relationship between the United States and Georgia is at an all-time high as a result of our active work in recent years. The X Term Parliament will prioritize the further deepening of these relations and the more active involvement of the United States in the geostrategic area of the Black Sea and Georgia. Parliamentary diplomacy will play a key role in achieving Georgia's national interests in the foreign arena, and we will use all the mechanisms at our disposal, including international and regional parliamentary assemblies and friendship groups in bilateral relations", - the Chair stated.

Nikoloz Samkharadze called on the opposition parties to condemn the anti-American and anti-European campaigns and support the discussion of the Resolution on Foreign Policy in the Parliament.

"Amid the growing anti-American and anti-European hysteria and propaganda led by some odious opposition leaders, it is important that opposition forces, which consider themselves pro-Western, condemn these campaigns and join this very important resolution", - N. Samkharadze noted.