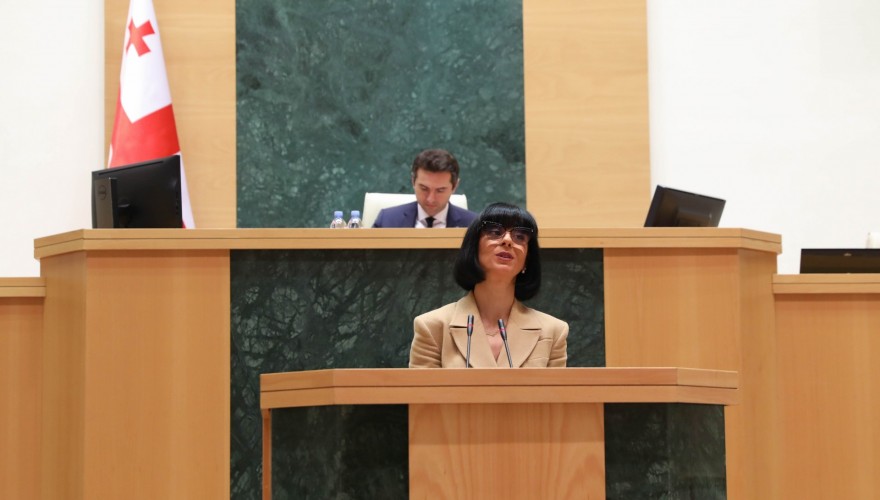 "Even in the midst of the pandemic, the occupation regime's harmful acts persisted, including so-called borderization and illegal detentions of Georgian citizens, which not only restricts residents' freedom of movement, but also puts their health and lives in jeopardy”, - Tea Akhvlediani, Georgia's State Minister for Reconciliation and Civic Equality stated while reporting to the Parliament within the Ministerial Hour.

"My report today covers the one-year period following my appointment as State Minister, which was unprecedentedly challenging in terms of a global pandemic in the face of substantial domestic, regional, and international challenges, particularly for individuals living in occupied areas. The situation was made worse by the current Russian occupation and its accompanying illegal processes, which included active steps toward de facto annexation, ethnic discrimination against the people of Gali and Akhalgori, restrictions on freedom of movement, education in the mother tongue, and property rights. The Russian occupation government forcibly isolated our two integral regions of the Abkhazian and Tskhinvali. The Akhalgori district was in exceptionally bad shape, with many people losing their lives as a result of the humanitarian disaster”, - Tea Akhvlediani said.

According to the State Minister, despite the pandemic, a unique financial mechanism known as the "Peace Fund" was established and is now fully operational. As a result of two grant competitions, more than 100 qualified applications from Abkhazia and Tskhinvali regions were received, with 50 business projects being funded and some of them being implemented successfully.

"It's worth noting that one of our policy's most powerful tools is the effective implementation of all three sectors of the Peace Initiative, one of which is the development of trade between divided cultures, which is critical for reconciliation and confidence-building”, - Tea Akhvlediani delivered.

"In the years 2020-21, almost 2000 citizens of the occupied territories profited from and received high-quality medical care at a variety of high-profile clinics. Furthermore, we have not halted the regular supply of medical commodities to Abkhazia, including vaccination and influenza vaccines, anti-diabetes, anti-tuberculosis, and anti-HIV/AIDS medications, which cost up to 1.5 million GEL each year. The overall amount spent on common healthcare components exceeds five million GEL”, - the State Minister noted.

According to Tea Akhvlediani, the interaction with the Abkhazian and Ossetian communities has never ceased, as indicated by beneficial outcomes in trade, education, healthcare, agriculture, energy, the environment, archive material exchange, and other areas.

"I would like to reaffirm our readiness to give a new impetus to the result-oriented dialogue based on common interests, which will have a tangible impact on the rights and humanitarian situation of the population”.

One of the key directions of the government's agenda, according to the State Minister, is to support and care for the population living near the dividing lines.

According to her, heating has been provided to up to 14,000 homes, 74 villages have been gasified, and up to 2,500 students have received higher education funding.

"In 2021, the overall cost of ongoing, completed, and planned infrastructure projects will be 82 million GEL. Social aid was provided to all 3,400 households in all villages along the demarcation line, including socially vulnerable families, orphans, individuals with disabilities, and the elderly, at the initiative and organization of the Office of the State Minister”, - the State Minister said.

Tea Akhvlediani discussed the international community's involvement in the conflict's peaceful resolution process, as well as the significance of close coordination with strategic partners.

She also emphasized the importance of developing a new engagement strategy and developing new ways, stating that the current strategy paper is out of date and does not fully match current needs.

"We've already finished the 2010 Engagement Policy Implementation Assessment Document, and we're working on an updated strategy that incorporates new ways that are adapted to the demands and opens up new possibilities. At the same time, we've established a Reconciliation and Involvement Policy Advisory Council, which will help us prepare future measures and initiatives with the help of civil society and professional specialists”, - the State Minister said.

Tea Akhvlediani thanked the Parliament of Georgia and especially the Interim Commission on Restoration of Territorial Integrity and De-occupation for their active involvement and support in the implementation of the reconciliation policy and its strategic review.

Following the presentation of the report, the State Minister answered MPs' queries and provided additional clarifications in a number of areas.

In accordance with the Rules of Procedure of the Parliament, the Ministerial Hour continued with speeches by representatives of political groups and factions, where political statements and assessments were made on the activities of the Office of the State Minister.

Tomorrow, November 19, at 12 p.m., the Parliament will have its next plenary session, during which the Minister of Foreign Affairs, David Zalkaliani, will be heard in the format of the Ministerial Hour.