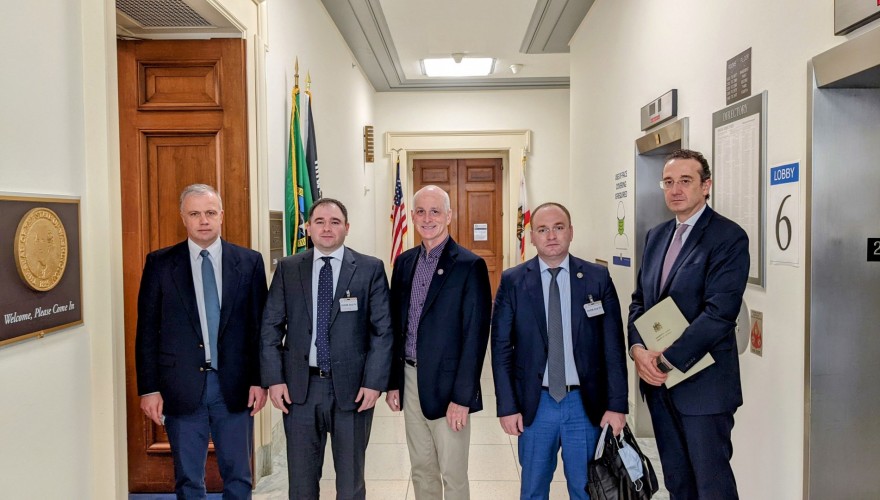 The Parliamentary Delegation serves a visit to the USA and holds the meetings.

Today, the meeting was held with Congressman Adam Smith – Chair of the Armed Forces Committee, and Congressman John Garamendi.

The parties discussed the security of Georgia and emphasized the steps that may be taken by the USA for Georgia in view of the effective aid in the defense and security sphere.

The parties touched upon the grave situation in the neighborhood of Georgia, South Caucasus, as well as Ukraine.

The main accents were made on the security and defense capacity of the country. As noted, the USA is committed to supporting Georgia. The parties overviewed the ways of aid.

The Congressmen underlined that Georgia is the most loyal and reliable partner for the USA in the region and hence, America is interested in seeing a strong Georgia capable of protecting the Western values in the region.

“Georgia is a strong ally of the USA highly contributing in Afghanistan. We will cooperate on the regional problems. We are aspired to maintain the partnership and are concerned about the Russian aggression in the region. We want to cooperate with Georgia and other partners on deterrence of Russia and maintenance of peace in the region”, - Congressman Smith stated.

According to him, all European allies and the USA shall unite and jointly try to deter Russia in Ukraine, Eastern Europe and the Caucasus.

The parties touched upon the NATO integration and underlined the necessity of acceleration of the membership.

Georgian MPs appealed to the Congressmen for more efforts for NATO membership, which will be the most important step for the national security of Georgia and elimination of the aggression of Russia.

Georgian MPs overviewed the grave situation in the occupied regions and annexation by Russia.

The meetings are as well scheduled in the US Congress, Senate and the Department of State, as well as in NDI, IRI and USAID.