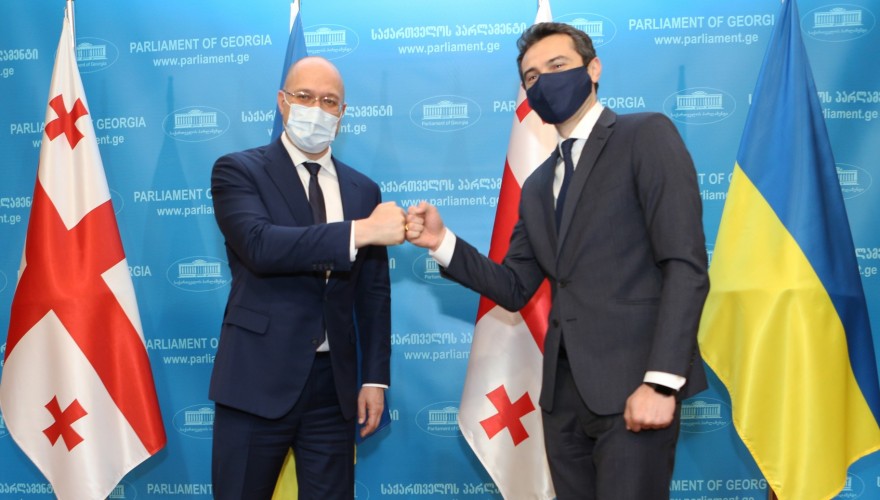 The Speaker, H.E. Kakha Kutchava met with the Prime Minister of Ukraine, Denys Shmyhal to discuss the friendship and strategic partnership between Georgia and Ukraine.

The meeting, which was attended by representatives of the parliamentary majority and the opposition, put a spotlight on the importance of further strengthening relations between the legislatures of the two countries, as well as activating the format of the Tripartite Parliamentary Assembly.

The parties expanded on the progress made in the NATO integration process and noted that membership in the Alliance is one of the key priorities of the two countries' foreign and security policies.

K. Kutchava stressed the importance of the support of friendly countries in the process of Western integration of Georgia and dwelt on the application that the country intends to make in 2024 for EU membership. The meeting focused on the processes taking place along the borders of Ukraine and the territory of the temporarily occupied Crimea and the aggressive actions of Russia.

The Prime Minister of Ukraine thanked the Speaker of the Parliament for his support to Ukraine in the international arena in both bilateral and multilateral formats and confirmed that Ukraine will continue to actively support Georgia's EU integration.

The parties noted the opportunities and importance of intensifying relations in various fields in the post-pandemic period, including economic recovery and tourism.

The Prime Minister of Ukraine has invited the Speaker of the Parliament of Georgia to visit Ukraine.

The meeting was attended by Vice-Speakers Archil Talakvadze and Levan Ioseliani, Chair of the EU Integration Committee Maka Botchorishvili, Chair of the Foreign Relations Committee Nikoloz Samkharadze, as well as the Chairman of the Faction "Partnership for Georgia", Badri Japaridze and the Chairman of the “Strategy Aghmashenebeli”, Giorgi Vashadze.