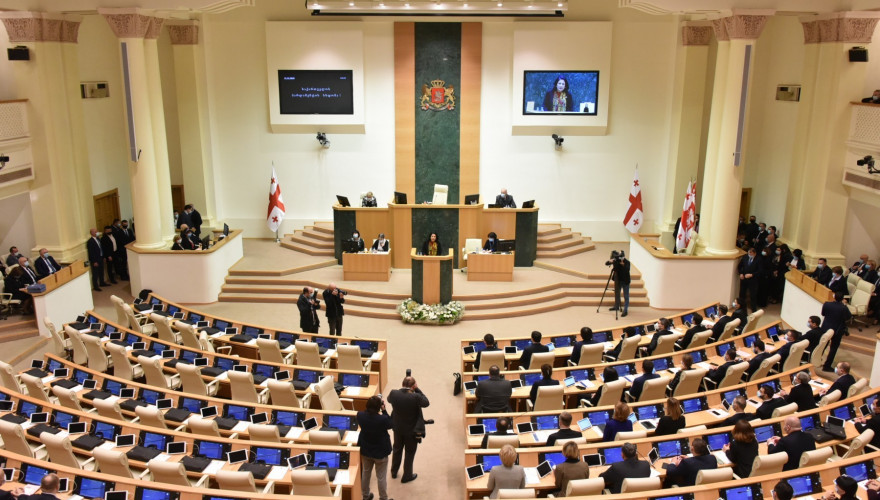 The Parliament Palace has hosted the first Plenary Session of the Newly Elected X Term Parliament.

In line with the Constitution and the Rules of Procedure, the President of Georgia, Mme. Salome Zourabichvili opened the first session and congratulated the newly elected MPs on the victory in the Parliamentary Elections and wished them well in serving the interests of Georgia.

Overviewing the current situation in the country, S. Zourabichvili condemned one’s declaration as an enemy and traitor and noted it to be fundamental to achieving Georgia’s strategic goals.

"Georgia is at a crossroads. The country was freed from visible shackles, but invisible shackles turned out to be more solid. Currently we are independent, we are free, but we still need to release our consciousness and strengthen our institutions", - the President addressed and added that the attack on the institution, which is the axis of our identity, democracy, security, stability and the future of the country, is destructive for the state.

She also dwelt upon the implications of the work of different branches of Government in proceeding the country, the challenges and needs in different areas.

As the President added, there is a need for new approaches: - "The country and the society need a future orientation or perspective, a vision. We need a new approach to get closer to the Abkhazian and Ossetian population living in our occupied regions''.

According to her, taking into account our neighbors in the Caucasus, Georgia is expected to regain its historical role as the locomotive and unifier of the Caucasus.

"We need to elaborate on a new approach to Euro-Atlantic integration as the mere words stating that Georgia is approaching Europe and NATO and the door is open for membership is not sufficient", - the President stated and added that it is necessary to reason about new forms of cooperation with NATO.

"We also need a new approach to global challenges. The pandemic has brought about a new reality in international relations in which only major countries remain the main actors. In this context, the mechanisms for activating small countries are outstanding”, - Salome Zurabishvili remarked.

According to her word, we shall still use the historical principle of defeating the enemy with unity and support as we used to do in the most difficult periods of the past.

"Let it be our unifier, our driving force, because the construction of a new Georgia begins here and now. This responsibility largely belongs to this Parliament. I am very sorry that part of us chose to stay out because the responsibility requires everyone to be together in this situation and employ all our opportunities in the common task. I hope that the Parliament will be composed of as needed and will be the multi-party legislative body reflecting the needs of our country", - Salome Zurabishvili addressed the Parliament.

After the speech, the floor was given to the senior MP, Mr. Vladimer Kakhadze, who, according to the Rules of Procedure, chaired the first session.

According to him, 88 members are present at the first session of the Parliament and the sitting is authorized to commence working. He also introduced the agenda to the deputies.

The Chair of the CEC, Ms. Tamar Zhvania introduced the information about the election returns and the compulsory documents for the recognition of the powers of the members of Parliament.

According to her, the CEC summed up the Parliamentary Elections of Georgia on December 3.

"Elections were held in a total of 3847 polling stations both on the territory of Georgia and abroad", - Tamar Zhvania noted and added that the largest number of observer organizations was registered for the 2020 Parliamentary Elections this year.

Besides, according to the final results, 9 election subjects overcame the 1% threshold, namely:

According to Tamar Zhvania, Georgian Dream candidates have been elected as majoritarian members of the Parliament in all 30 majoritarian constituencies.

During the one-hour break announced at the session, the Temporary Mandate Commission of the Parliament examined the documents submitted by the CEC, the results of which were reported to the Parliament by the Chairman of the Commission, Irakli Kadagishvili.

The Parliament recognized the authority of 150 MPs. The relevant resolution was adopted with 87 votes. All those who were elected by the CEC in the October 31 elections are full-fledged members of the Parliament. From that moment on, the previous term Parliament was suspended.

The Georgian national anthem was performed in the Parliament.

The Georgian Dream faction, chaired by Mamuka Mdinaradze and consisting of 90 people, was registered. According to Irakli Kadagishvili, the majority is identical to the composition of the faction. Irakli Kobakhidze will be the leader of the majority.

According to him, 15 committees will work in the Parliament.

At the very first session, the MPs elected Archil Talakvadze as the Speaker of the Parliament with 86 votes.

In accordance with the Rules of Procedure, the Speaker addressed the Parliament. He thanked the MPs for their confidence: "After the constitutional reform and important democratic changes, today the 9th Term Parliament will pass the baton of further strengthening of democracy, good governance and Georgia's European and Euro-Atlantic integration to the new 10th Term Parliament", - Archil Talakvadze addressed.

According to him, the Georgian Dream will maintain and further strengthen the main achievements of the democratic transition of 2012 - human freedom and security, democratic governance, constitutional order and stability.

"We make a pledge to the society to create all the conditions for Georgia to apply for full membership in the European Union in 2024. At this important historical moment in our country, the Parliament of Georgia is committed to cooperation and discussion with healthy political forces, and we are ready to fulfill the powers imposed by the Constitution", - the Speaker stated.

Today, Giorgi Volski was elected as the first Vice-Speaker while Kakhaber Kutchava and David Sergeenko were elected as Deputies to the Speaker.

The Parliament took note of the appeal of Giorgi Gakharia, in accordance with Article 56(1) of the Constitution, on the removal of the powers of the Government of Georgia before the Parliament.

The first session of the newly elected Parliament was attended by: the President of Georgia, representatives of the executive and judicial authorities, diplomatic corps, Georgian Patriarchate, members of the Patriarchate.

Conforming to the pandemic-related regulations, everyone in the Parliament Palace wore a face mask.