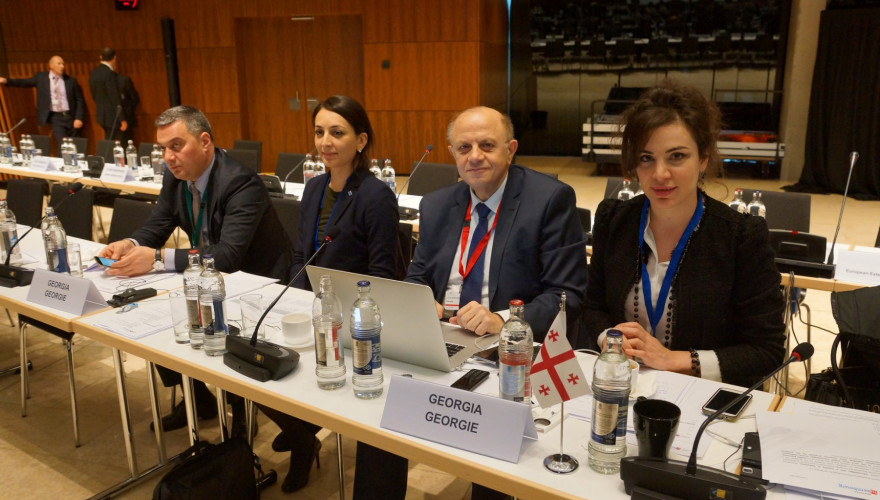 At the sitting of the EU Integration Committee, the Chair, Levan Berdzenishvili delivered the report on participation in COSAC plenary session. As a result of productive cooperation with European Parliaments and MEPs, the Committee gained opportunity to have contacts with COSAC.

The delegates discussed necessity to open legal ways of migration in view of reduction of illegal trespassing to EU states and necessity to increase efficiency of border protection. The delegates called on each other to undertake solidary and joint actions.

The Deputy-Head of the Directorate General of EC Enlargement and Neighboring Policy delivered the report on enlargement policy. The delegates also discussed restoration of negotiations on accession of Turkey to EU. Role of Turkey for EU regional processes was underlined.

As noted, EU enlargement policy shall be based on successes by candidate states in democratization, institutional modernization and economic development directions. The delegates spoke about progress by Georgia in EU integration processes.

The Delegations of the friend countries for Georgia – Romania, Latvia, Lithuania and Greece – underlined importance of support sovereignty of Georgia, necessity of visa free regime with Georgia and EUAA implementation positive perspectives.

Guguli Magradze delivered the speech, speaking about visa liberalization action plan implementation. She underlined usefulness of visa free regime as for Georgia so for EU border protection. She spoke about foreign challenges despite of successful EU integration processes.

Victor Dolidze spoke about importance of EaP for political association and economic integration of partner states. He emphasized EU foreign and security policy perspectives to which Georgia is a contributor. He also underlined necessity of visa free regime with Georgia and spoke about EU and NATO integration perspectives.

The Chair of EU Integration Committee held the meeting with the Chair of European Affairs Committee of Belgian Senate. Levan Berdzenishvili asked his counterpart to accelerate EUAA ratification. The parties touched upon progress of Georgia in EU integration.

COSAC plenary session adopted the declaration and the conclusion. The declaration provides support to European neighborhood policy, within which Georgia-EU relations are being developed. The Committee will further communicate with Presidential Troyka to facilitate Georgia’s EU integration and involvement in Parliamentary dialogue. Nino Iobashvili: Georgia condemns the Russian military aggression in Ukraine and supports the sovereignty and territorial integrity of Ukraine

Meeting of Nino Tsilosani, Maka Botchorishvili and Khatia Tsilosani with the EU and FAO representatives

Meetings of Maka Botchorishvili and Levan Karumidze in the European Parliament